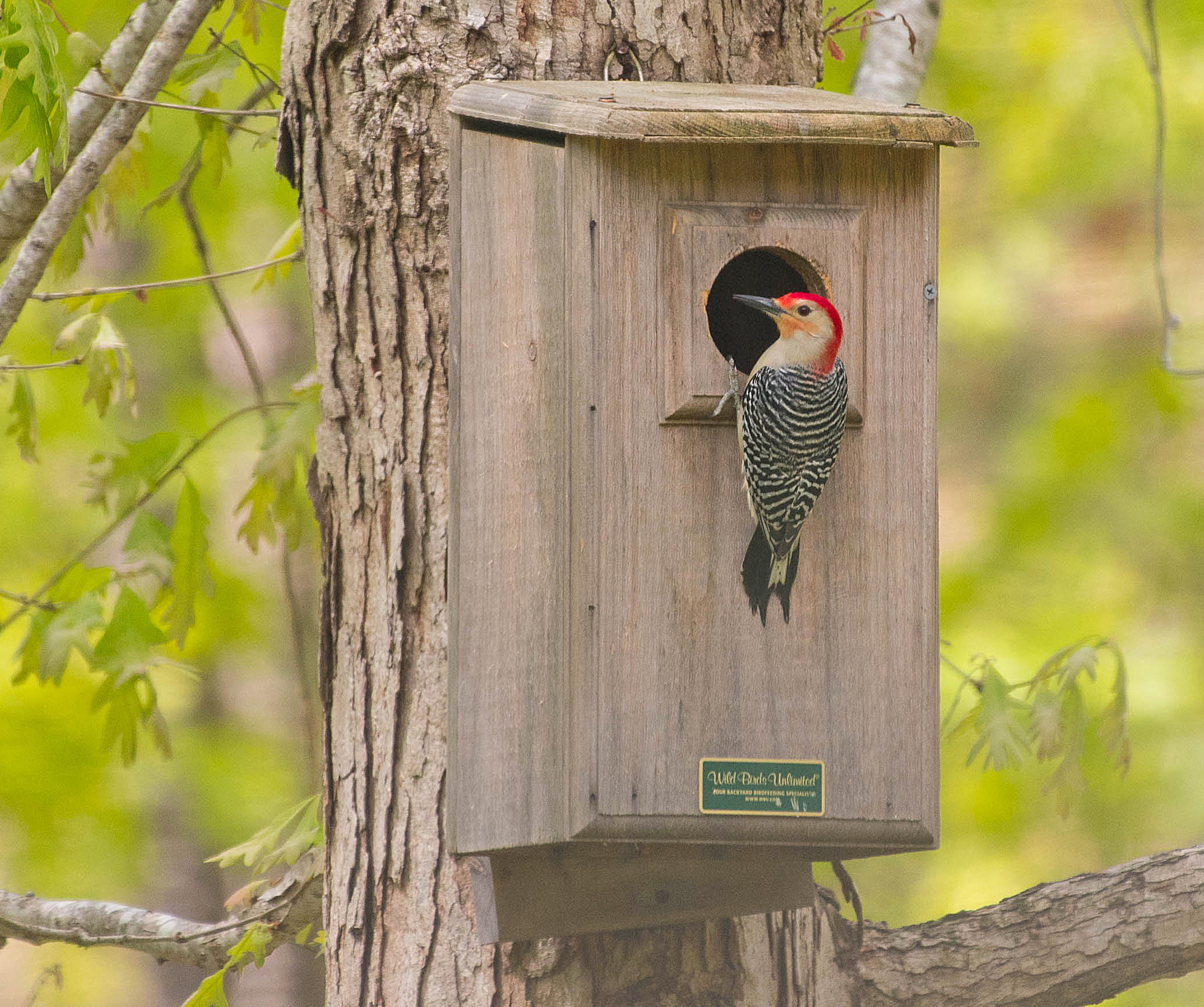 Setting up a nesting box in your yard can provide an essential area for many kinds of birds to raise their young. While many species are able to hide their nests in dense foliage or grassy meadow areas, many others require holes, or cavities, for nesting. Some birds, such as woodpeckers, can excavate their own holes in dead or decaying trees. Others, like Chickadees, Nuthatches, or Bluebirds, depend on the abandoned cavities of others.

Recently, however, an increase in development and removal of damaged and dead trees has left many cavity-nesting birds with fewer natural places to raise their chicks. In addition, invasive birds, such as the European starling and the house sparrow, compete with native ones for the use of the remaining nest sites.

Adding a suitable birdhouse to your habitat will not only benefit native bird species, it will also give you an chance to watch and enjoy them. If you have successful nests, check out Cornell Lab of Ornithology’s Nest Watch program to report on the action. Nest Watch also has birdhouse plans, tips, and more.

Building or Selecting a Nesting Box

Although most birds prefer natural cavities for nesting, with the correct design a nesting box can serve as a good replacement.

There are numerous types of bird nesting boxes available commercially. Each box contains different features and is targeted at a particular bird species. But not all nesting boxes are created equal. There are several features to consider when purchasing or building a nesting box.

Check that the box is well constructed and contains these basic features:

It is also important to make sure that your box incorporates features preferred by the particular bird species you hope to attract. These features include the entrance hole size, the height at which the box is posted, and the type of habitat surrounding the box. When purchasing a nesting box, research the physical requirements of the species that you hope to attract and make sure that you are investing in a functional, rather than ornamental, birdhouse. Check out the Birdhouse Network of the Cornell Lab of Ornithology for more specific information on species preference. For greater success, be sure to use a predator guard and place your box carefully to deter potential predators, like snakes, cats, raccoons, and others. See Nest Watch’s Dealing with Predators page to learn more at https://nestwatch.org/learn/all-about-birdhouses/dealing-with-predators/.

Where to Place Your Nesting Box

The habitat available to you will be the primary factor determining the type of birds you can attract for nesting. Here are a few things to consider:

When to Set Up Your Box

Make sure your nesting box is in place well before the arrival of breeding season.

This will give birds a better chance of finding and using your box, and it may even be used for winter cover if put outside earlier. Don’t be discouraged if birds don’t find the box in the first season; sometimes it can take a few years for the birds to find the box.

Monitoring and Cleaning Your Box

Once breeding season begins, monitor your box for activity. You can enjoy watching adults quickly dart in and out as they build their nests or feed hungry nestlings. If your box is first discovered and used by invasive bird species consider removing the nest. Doing this regularly will likely encourage the bird to move to another location and free the box for use by native species.

Once eggs have been laid you may want to monitor the progress of the nest. Lightly tap on the box before opening the panel to allow the adult bird to leave. So as not to become a nuisance, limit your viewing time to less than a minute once a week. Keep track of the progress of the nestlings. This way once they have fledged and the box is no longer in use it can be cleaned. Some birds will not use cavities with abandoned nests in them, and removing the debris cuts down on ectoparasites for the next set of nestlings. If you remove the nest in a timely fashion you could enjoy two to three broods per season!

Even with nest boxes in place, bluebirds must compete with both introduced and native species that also want to call these nest boxes their home. Knowing where to place and where not to place bluebird nest boxes is critical. Chickadees and titmice, for example, prefer nest boxes near or under mature trees or within woodlands and forests. By contrast, bluebirds like nest boxes out in the open; even a small yard with open spaces will suit a bluebird. Most important, bluebirds need to live near a ready supply of insect food.

Since bluebirds defend large feeding territories around their nests—one or two acres in early spring—they don’t want to nest close to other bluebirds. Tree Swallow pairs won’t nest close to one another either. So reduce competition by installing pairs of bluebird nest boxes no more than fifteen to twenty feet apart. Bluebirds may nest in one, and swallows, chickadees, or titmice in the other. This “peaceable kingdom” occurs for practical reasons: These bird neighbors, by and large, do not share the same food supply. But the nest box “pairing” idea is not without differing opinions. Some people believe it encourages other species more than it accommodates bluebirds. Others put up a second box nearby only when a non-bluebird species has claimed a nest box first.

Ironically, the cutting of Eastern forests, especially pine woods, for agriculture in the nineteenth century may have actually benefited Eastern Bluebirds by creating additional foraging and nesting habitat. More recently, however, their populations have been affected by loss of habitat and tree cavities, unusually cold winters in the 1960s and 1970s, egg and chick predation, and competition for nesting sites by introduced House Sparrows and European Starlings.

Field marks: Males are bright blue above and rusty orange below with a white belly. Females look similar but have a blue-gray back and lighter orange underparts. Both sexes are seven inches long and stout billed. In flight, look for short blue wings and tail.

Voice: The call is a musical chur-wi or tru-ly. The song is a series of three or four soft musical notes, often described as a warble.

Feeding: Keen-eyed Eastern Bluebirds feed on ground-dwelling insects, including beetles, crickets, grasshoppers, and caterpillars, which they can spot while perched as far as 150 feet away. They pounce upon their insect prey, then fly to a perch and strike it against a hard surface before feeding—or they just catch and eat insects in the air. Adults also feed juicy, high-protein spiders to nestlings. Wild berries are also eaten, especially in colder months. At feeders, offer raisins, currants, suet mixes, and mealworms (live or freeze-dried).

For details, we recommend you check out Nestwatch.com at https://nestwatch.org/learn/all-about-birdhouses/birds/eastern-bluebird/ or the North American Bluebird Society at http://www.nabluebirdsociety.org/PDF/NABSFactsheetGettingStarted.pdf. Wild Birds Unlimited of La Plata and Lexington Park, Maryland, also sell ready-to-install nest boxes for bluebirds and other species.